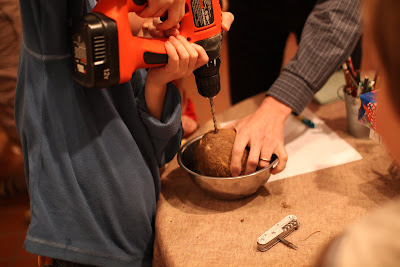 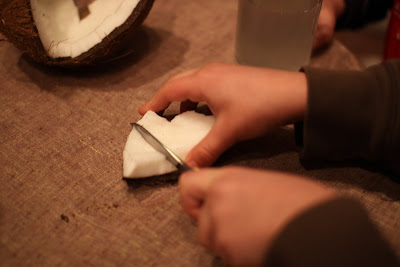 it was such an entertainment!
yes we got a coconut and the kids were so eager and enthusiastic about opening it up and trying the milk and meat! using all kinds of tools, starting with elias new pocket knife, giving up and trying the power drill. all eyes on it, waiting expectantly for things to happen...
there were different attacks on the coconut taken outdoors, with hammer and throwing it on the ground from up high, letting a big rock fall on it etc. all of those attempts did not work. only the drill did it!
the coconut milk got poured into a glass and then the nut got hammered into smaller pieces, which then got cut up with the pocket knifes.
at the end all of us got some wonderful fresh coconut meat and a sip of the milk, which the kids did not like at all...
as you might can imagine, it was a great spectacle and we realized once more, why there is no tv in the house.
thank you s for providing the coconut, i guess you didn't expect to bring so much fun entertainment into the house, but it was just the best!
Posted by daniela at 10:22 AM