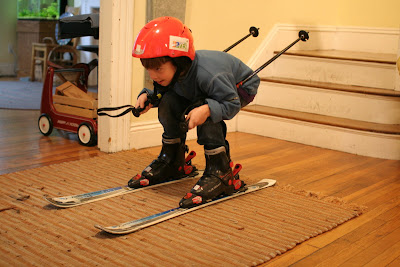 we have a future skier in our family...
we have not contemplated such a thought ever. but it happened, like the snow on the ground this morning.
it came about on monday afternoon, i found an email in my inbox, which told us about a program called yeskids. friends of ours signed up with them to have the kids go on ski trips. we inquired, about the sign up, as it was after registration deadline. my hopes got up, when the person in charge told me, that there is a possibility of still signing up on tuesday night at their office. there were a few dates open and some of them were possible for elias to go. my friend went to get the equipment with her sons and so, elias could hop along and get signed up. he came home with all the equipment needed to ski!
wow, yes! it was so quick and on the 3rd he will be standing on his skis in the snow of one of the new england ski slopes.... more after the 3rd!
Posted by daniela at 12:53 PM